Luigi had some of his clan review the BFG 9800 GTX Video Card over at i4u gadgets and I wanted to pass along their findings:

The BFG 9800 GTX runs on the NVIDIA 9800 GTX GPU. The core clock of the card runs at 675 MHz, the shader clock is 1688 MHz and the memory clock is 2200 MHz. the card has a 256-bit memory interface and a memory bandwidth of 70.4GB/sec. the BFG 9800 GTX has 128 stream processors. The card features 512MB of GDDR3 RAM and the card is PCI Express 2.0 compliant. Other features include HDMI capable with adapter and HDCP capable for protected HD content. Read the entire review: Continue Reading

Luigi of I4U had some time yesterday to review the PNY IronKey USB 4GB UFD. In short it’s a great security device but you give up performance for such security. The PNY IronKey uses AES encryption which is always on and keys generated by the on-board cryptochip uses FIPS 140-2 true compliant random number generation. Since the IronKey uses the cryptochip the keys used to generate access never leave the UFD (and onto computer).

The PNY IronKey has an on board stealth browser via Firefox and is entirely incased with a water tight sealant which sits underneath the rugged, outside enclosure. Continue Reading

Several weeks ago I picked up a 1 penny (yes 0.01) card reader for microSD cards from USB Fever. Today, I set aside some time to see how well the little bugger performs…and to my surprise, very well. Introduction: The microSD USB Card Reader is very compact and comes with mini lanyard and plastic case. The device is unique in that all components for the card reader sit inside the USB Type-A connector. It makes for an extremely small and portable reader, and can be, at times, difficult to pull out from a stubborn USB port. However, given the idea of what this product is all about – compact, portable performer – it didn’t bother me too much.

I compared the performance of a direct connect of the microSD card through the USB card reader to the microSD adapter provided to me from SanDisk when I purchased the flash memory. When using the SanDisk adapter, I did need a USB card reader which could contribute to Continue Reading

hField Wi-Fire Review hField sent GetUSB.info their latest WiFi signal boost device the USB Wi-Fire for product review. Below are the details from our Wi-Fire review. Wireless Local Area Networks are by far the least expensive and most convenient way to stay connected. However, using WiFi technology means we live with limitations. The biggest limitation, and most obvious from the term “wireless local area network” is the distance between access point and receiver. To that end, hField develops WiFi extenders to boost signal strength, increase connection speed and improve reception. The hField Wi-Fire is a directional antenna with a highly sensitive receiver designed to increase signal strength and connection speed. hField includes their proprietary software which also aids in the optimization effort. It’s important to understand the Wi-Fire is not a wireless router, but rather an add-on device to boost signal strength on a laptop or workstation which is receiving a wireless router signal.

It would be nice to have $250,000 and about 5 years to review every iPod speaker system available in the market. Since that’s not going to happen we did have the chance to review one of the top models, the Klipsch iGroove HG.

The Logitech Premium Notebook Headset was reviewed by Shane McGlaun of I4U and here’s an outline of what I4U found. First off however, lets run down the specifications on what we’re looking at. The Logitech Premium Notebook Headset is targeted towards the mobile user with compact design, travel kit case and folding headset design. The headset is adjustable for customization and uses surface touching speakers, rather than ear buds like what you get with an iPod. This can be a good or bad thing depending on the weight of the headset, and from the sounds of it, Logitech gets uncomfortable; but read on for that…

Computer cables are the most over looked piece of technology on any computer system. Too often a cheap cable or a poorly made socket is the cause of many late nights or critical problems at urgent moments. You should never short change yourself and save a few dollars between a cheap cable and higher end cable. Today GetUSB looks at Tendon USB cables. Tendon makes a full line of USB cables, DVI cables, HDMI cables and host of other cable products.

Today we are looking at the 15 foot USB-A to USB-A cable which is ideal for scanners, printers, external hard drives and USB hubs. Tendon also sent a variety of other USB cables, all of which are made using the same technique, materials and craftsmanship. Continue Reading

I received the iPod FM Transmitter from Hannah over at Proporta and today had a chance to play around with it.

The iPod FM Transmitter is a compact, light and simple product to use. Using the iPod connector you click the FM transmitter into your iPod Nano (also supports iPod mini, Photo, 4 & 5GB pods and video iPod – but today tested with Nano) which is nice to have the direct connect because no extra cables or wires are needed to make your iPod work with a 3rd party radio.

Bottom Line: For the $24 price tag it’s a good product for getting your tunes to a radio; however, we’d like to see some more signal strength to make the music clear in all situations. Continue Reading

Why give someone a single still framed picture when you can give them an entire slide show? The MF-575 is an inexpensive hi-tech digital photo, MP3, and video player with a bright, high-resolution 5.6-inch color TFT screen and USB connectivity. 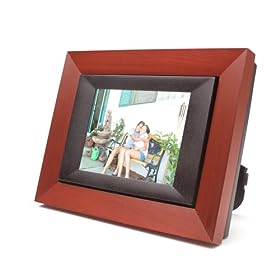 When I bought my first MF-575 picture frame, I got it as a gift for a family member who liked to complain that I never send them pictures anymore. The problem is, I have a digital camera and haven’t gotten any pictures developed in several years. So now, whenever I go over to their house for a visit, I just bring an extra memory card from my digital camera full of new pictures. If you don’t have an extra memory card, the MF-575 has an easy-to-use MD/SD/MMC memory card reader that plugs into any computer with a USB port. So you can just plug the entire picture frame into your computer and copy the pictures onto the card that way if necessary.

This year on Christmas morning, I was thinking about taking a series of pictures while everyone is opening their gifts. Then I’ll take the memory card out of my digital camera and pop it into the MF-575 picture frame for an instant slide show for everyone to enjoy on Christmas afternoon. Good idea right? The number of images you can put into your MF-575 slide show is only limited by the capacity of the memory card being used. Here’s the full review: MF-575 Digital Picture Frame BeSocial: digg story | methodshop Continue Reading

Robert from USB Fever sent me a USB car adapter charger and I wanted to chime in with a quick review.

As expected it’s literally plug-n-play. Works without a problem. What originally got my attention about this simple device was the two port connectivity. Easy to charge his and her cell phones, iPods or PDAs. A nice glowing red LED shows the unit is working and charging. It would be nice to have a switching LED for when the battery is full. I did notice the USB car adapter charger has over-current protection. This means if your car outputs a spike in volts the charger will cut off power before your device gets fried. Continue Reading

Just the other day, Martin of Digital Reviews Network sent me a product review of the MoGo Bluetooth mouse from Newton Peripherals. I report on the Mogo Mouse earlier and commented on the slim design and handy storage area, in the PCMCIA slot. Martin’s review proves this point and a whole lot more. The primary goal of the review was to find out if the MoGo mouse really performed as a functional device, despite the small size and slim design.

However, Digital Reviews was very surprised to find it’s an elegant design which is very useful.

“one quick flick and the (hind) legs spring out from underneath making the MoGo mouse poised and more comfortable to use! With that â€œkickstandâ€ it is eminently “holdable and usable” but not as comfortable of course as a normally proportioned rodent.”

The Pinnacle PCTV DVB-T Flash Stick is one of the many TV receiver solutions out in the market these days. Dave Carter from Gadget Centre did a detailed review I’ll share with you. First off, the Pinnacle USB tuner is a step above the rest in that it’s true plug-n-play. There is no loading of software, simply plug in via USB and you’re set-up. This is a big bonus as taking the TV tuner from PC to PC is a snap. Continue Reading