The new iPhone keyboard from Iomnio is a great example on the convergence of technology.Â  The keyboard, named WOWKey, has a dock station for your iPhone where-by giving you full keyboard connectivity and functionality to your iPhone. 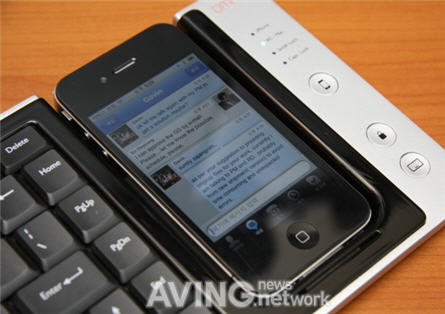 With the WOWKey you can respond to emails quickly and easily.Â  You can draft letters, run excel spreadsheets and much more like a traditional laptop computer.Â  The WOWKey gives you the functionality you need to more effectively use your iPhone.Â  In my opinion, this is the direction which computers need to go.Â  From some studies, the majority of computer use is for email response and web browsing. Iomnio has two additional features which any iPhone lover will appreciate; first, they have 15 hotkeys designed for the iPhone for quick navigation and utility access.Â  Second, WOWKeys offers is the use of the multi-touch function on a PC display and the Air Mouse Pro, an app that can be used as a laptop touchpad or number pad. 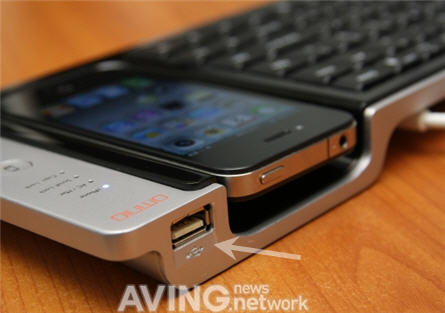 The WOWKey from Iomnio is priced at an equivalent $105 US dollars.Â  The WOWKey is currently only available in Korea, but is clearly designed for the largest market, the United States, as you can see the English version settings in the screenshot from the original article at AVING.net. Continue Reading

The Sharper Image does seem to come out with some cool stuff.Â  Example, they announced a laser beam music system powered by USB.Â  The music system is shaped like a big “W” with laser beams spanning each post.Â  Using your fingers or hands, breaking the laser beams produces pre-authored sounds.

Today I’m able to report about the Casio LK300 with USB and TV connectivity. I didn’t perform the review, rather my brother did. So lets see what Ned had to say: I have to say the Casio LK300 is bigger than I expected and definitely more solid and quality built than anyone would expect for the price (about $200). The LK300 keys provide just enough friction to make them feel almost real, but obviously not exactly like a real, piano hammer like feel. Although I’m not a piano enthusiast, I did pick up the LK300 to learn. After all part of the enticing thing about the Casio is the ability to connect it to a TV and learn along with instructional lessons. During a lesson, the LK300 keys will light-up as the song is played giving you the exact location of which key to hit and when. It’s even got a nice feature to cover any delay you might have in stroking the key…a little late…that’s OK, the sound still matches the lesson song. 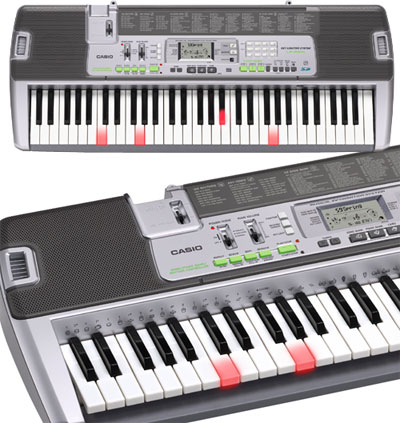 With the lessons, the software will provide feedback in the form of a scoring system whereby it calculates the number of Continue Reading