Today SanDisk launched their TrustWatch solution for UFD management. As one could guess, with hundreds of UFDs being deployed in a company there becomes a huge security risk for IT managers. TrustWatch is a well thought out solution to manage the complete life cycle of the SanDisk drives. In short there are 3 main components to TrustWatch.

TrustWatch Access – this component allows management of the UFD itself, such as passwords, email client, spyware scanner etc. TrustWatch Vault – This of course is the encryption portion of the solution for the UFD. Continue Reading

SanDisk, the 2nd largest seller of MP3 players just gave the well known Sansa a face lift. The Sansa Connect is the next step in wireless MP3 players. What we like about the Sansa Connect is the ability to access your music or photos via any Wi-Fi hotspot. This means the storage capacity of the player itself isn’t limited, but rather your PC storage capacity determines that – something we all know is east to upgrade. 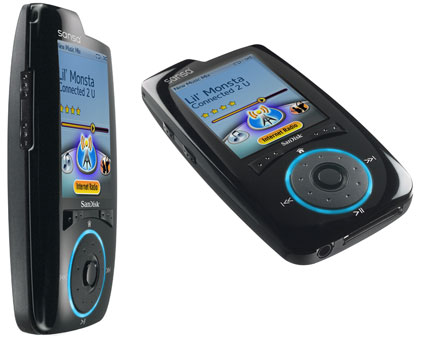 In addition, the Sansa Connect receives a wide range of music subscription services and streaming Internet radio. With a “live” button to connect into communities and grab features or recommendations for music genres. At 4GBs you can stuff (on average) 1,000 songs into the flash memory, but again, virtually unlimited when exchanging anywhere, anytime via Wi-Fi. Product is expected to hit March of 2007 at about $250USD. Continue Reading

Movies From USB to TV – Thanks SanDisk

Sometimes you want to give USB a big huge. Case in point, the new USBTV from SanDisk is something anyone could apprecate. It’s a device to simply copy video from your PC and play on your TV. The flash drive is loaded with a media player and video codecs so the device will play a video file directly off the USB drive to the TV.

So your TV doesn’t have a USB slot, well neither does mine, but that’s OK Continue Reading

Duck posted a concept flash drive which looks much like old-school bike locks. The USB flash drive has a stainless steel chassis with combination lock and wire strap. Knowing the combination will unlock the secrets stored on the flash drive. Oh, but of course encryption software is also included for that 2nd layer of security. The dual factor authentication design reminds GetUSB.info of the IDVault and SanDisk’s TrustedSignins drive. Continue Reading

I was about to mention folks in Seattle will love this flash drive, but since New York gets more rain fall per year, it’s the big apple city slickers who’ll appreciate this one. Kingston released a rugged USB flash drive that is water proof up to 4 feet. So if you’re puddle jumping and this jumps from your pocket, the data is safe and secure. Continue Reading

Typically we don’t give kudos to “competing” storage devices to that of USB but since SanDisk was nice enough to create a USB Micro Mate card reader for the Ultra II Secure Digital media card we chimed in for a post. Continue Reading

3 step process to view anything on your PDA

Well, well, a card reader which is really a card recorder. SanDisk introduces their V-Mate which can record from a variety of video input signals directly to flash memory. From there, one can grab the flash memory stuff it into their PDA, cell phone or gaming console to view on the run. The biggest question we have is what kind of recording quality does this V-Mate bring to the table? Continue Reading

Skype on the go with Sandisk Cruzer Titanium and Cruzer Micro flash drives. Now preloaded on each unit you can easily make Skype calls from any PC. Include your contacts, phone numbers, emails and fax numbers via the Sync software. Also loaded with Avast antivirus protection and U3 software. U3 gives you the ability to carry Continue Reading

How big is the bang for your buck when dropping a couple C-notes on your MP3 player from SanDisk? Not much we feel. At just under $300USD you get 6GB of storage, FM tuner and FM recording, voice recording, support of common picture formats like jpeg, a fancy liquid metal back plate for durability a nice microSD expansion slot…and travel pouch and lanyard to boot. Alright, the c270 has some great features – and not to over look the 1.8inch TFT color screen – but the market is to saturated with more feature rich products for less money…say the iPod, Creative Labs…lets keep hunting.. Continue Reading

Need to save more than 12 hours of game saves, or how about 4,000 pictures so you can view them on your PSP? SanDisk to the rescue with their new 4GB Pro Duo Game Card for PSP. This Pro Duo Memory Card is in response to the growing demand from power users on the PlayStation Portable. “The PSP has clearly become more than just a gaming device,â€ said Wes Brewer, SanDiskâ€™s vice president of consumer products marketing. â€œSince there is no internal memory for the PSP, a Memory Stick PRO Duo flash card is the only way to store large amounts of entertainment Continue Reading

Press Release BOISE, Idaho, and FREMONT, Calif., March 8, 2006 – Micron Technology, Inc., (NYSE: MU) and Lexar Media, Inc., (Nasdaq: LEXR) today announced that they have entered into a definitive agreement for Micron to acquire Lexar in a stock-for-stock merger. Under terms of the agreement, each outstanding common share of Lexar will receive 0.5625 shares of Micron stock. Micron anticipates issuing shares in exchange for 81.6 million Lexar shares outstanding. Additional Micron shares will be issued upon the exercise of assumed stock options. Continue Reading