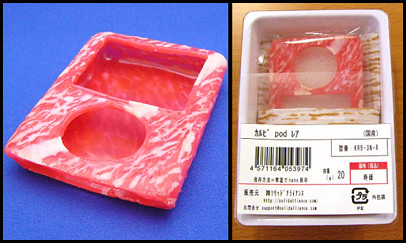 Capture video direct to H.264 video files for your iPod, iPhone, Apple TV, YouTube and even full resolution video backups from Blackmagic.Â  So why is Blackmagic so great?Â  Because it captures video into the native file format of your mobile device like iPod or iPhone.

The Blackmagic USB video recorder plugs directly into your PC via USB and using the included, easy to use software from Blackmagic you can recorder VHS, Video-8 or content directly from your video camera recorder. The software has a graphical interface to quickly and easily identify your destination device during job setup to begin the ripping process.Â  The software includes a cropping tool because sometimes your VHS tape has black borders or time display stamps.Â  Well not anymore. Check out this image of the software interface.Â  It’s clean, simple and logical. So getting excited and ready to pull the trigger on a purchase or maybe work it into your next months gadget budget.Â  Well be sure to set aside $119 + shipping. Continue Reading

Myka: BitTorrent Set Top Box Is King Of The Hill

Set Top boxes have a big limitation in that you get Pigeon Holed into one device such as AppleTV or the forthcoming NetFlix unit, but the Myka could change the landscape forever.Â  The Myka is a BitTorrent device which will work with anything the web has to offer and can download/play MPEG2, H.264, WMV and DivX media.

As Wired reports, the Myka is userfriendly because it takes the nerd out of the BitTorrent process.Â  The Myka is intelligent enough to provide content (legal or otherwise) from a Peer2Peer network without all the advanced skills often required to pull off a BitTorrent download.Â  The Linux based box is a simple connection to the TV via HDMI, composite (ouch), S-Video or SPDIF and connects to the internet via eithernet or WiFi.Â  The Myka comes with a variety of internal hard drive configurations (80, 160 or 500GB) and includes an external USB port for additional storage or future connectivity / peripheral options.

“Thereâ€™s no way the content providers will allow this pirate box on the market, right? Wrong. Myka already has the official BitTorrent service on board, which means it will carry legitimate content from 20th Century Fox, MTV, Warner and Playboy, amongst others.”

Wired posted a full interview with Myka’s president Dan Lovy, so if you’d like to learn more about the Myka set top box which will rule them all, jump. Continue Reading

Give Your iPod Some Wood

Okay, so that’s a cheezy headline, but here’s the deal – Vers Audio has this all natural cherry-veneered wooden speaker cabinet to add that classic look/feel to your office.Â  Personally, I think there’s nothing better than the sound coming from a wooden speaker box.Â  I still have some solid cherry-wood Bang&Olfsen speakers from 20 years ago – that sound absolutely awesome. Although the Vers 2X isn’t Bang&Olfsen, the 3 inch full-range speakers backed with 20-watts per channel should livin up your space.Â  At just 11.5″ x 5.6″ x 5.6″ the Vers 2X wont take up much room either.

The Vers 2X supports the entire Apple i-stuff line (including iPhone) and comes with a brushed aluminum remote for the armchair music enthusiast. Continue Reading

The biggest American reality show on TV has finally joined the iTunes platform. Fox Broadcasting, Fox Interactive Media and FremantleMedia signed an exclusive deal with Apple to bring American Idol audio and video performances to iTunes as single song-sized snippets available the day after they premiere on air.

Apple will also become one of the show’s premiere sponsors and maintain a branded presence on AmericanIdol.com, where some free streaming performances can be seen.

Word on the street is that USB Fever as a Firmware version 1.12 SIM card to unlock your iPhone.Â  Card is $30 and available now.Â  Here is a picture of what you get and it replaces the current iPhone SIM card.Â  The site also includes an iPhone tool kit to help you get through the process.

How to Reset Your Frozen iPhone [or iPod]

The guys over at Methodshop always come up with helpful tips on how to run your Apple gear.Â  So if you’ve got an iPhone or iPod this tutorial is worth a read – even if you haven’t experienced a frozen iPhone – it’s nice to know what you should do when it inevitably happens. Occasionally an iPod or iPhone may freeze or fail to respond to your commands. This can happen for a number of reasons and does not necessarily indicate a serious problem. Sometimes they just need a restart much like the way your computer needs a reset once in a while. Tutorial: How to reset a Frozen iPod or iPhone Restarting an iPod/iPhone is a simple procedure that will not erase any of your music, data files, or customized preferences. methodshop Continue Reading

Will 2008 be the year of ridiculous iPhone accessories? It just might…and to kick things off we have the iPhone Telescope lens. The clunky looking lens zooms an additional 6X from the standard iPhone along with a “super” wide angel lens.

The iPhone Telescope clicks into a crystal case which then snaps onto the iPhone itself. The idea would be keeping the clear case attached to the phone and whenever you’re ready to take some pics, you whip out the lens and attached it. I personally, would pack a decent point-n-shoot camera if I’m lugging around a zoom lens anyway – but hey, that’s just me.

After dropping a couple hundred on your iPhone, if you are slightly curious than another $18.99 is a no-brainer to see what the iPhone Telescope lens can do. iPhone Telescope product page from USB Fever. Continue Reading

Although Apple has already sold 7 million movies, Jobs said: “Thatâ€™s more than everyone else put together, but it did not meet our expectations.” Apple plans on overhauling their strategy by making 2 major changes: Jobs thinks that viewers would prefer to rent movies, not buy them. As a result, the new Apple TV software will allow users to Continue Reading

The MacBook Air is so thin, it only has 4 ports: USB 2.0, Micro-DVI, headphone jack and a MagSafe 45w power adapter plug. So what did Apple leave out? Continue Reading