Did An iPhone Really Burn Someone?

We have heard of crazy USB happenings before and they always seem a bit suspicious, case in point is the latest bit of news about an iPhone 4 bursting into flames. 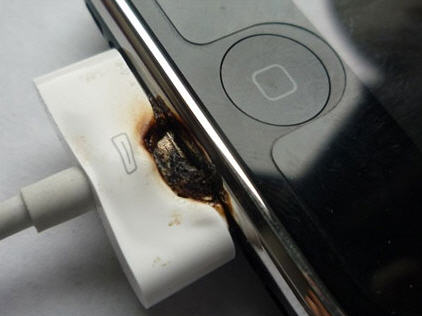 I doubt it really burst into flames but the temptation to make a social media claim of an iPhone 4 blowing up is all too tempting.Â  The truth is more likely a slow melt from poor circuitry with an “after the fact” photo to create the drama. Given the aforementioned iPhone 4’s bezel allegedly got extremely hot to the touch during the recharging process, you can stand to wonder if this might be an excellent warning sign for a phone about to blow. What do you think?Â  Post your comments on our Facebook page. Continue Reading

It’s fairly well known from user complaints over the weekend the iPad charges a bit differently then the logic used in our brain.Â  Here is the low down on the iPad USB power issue if you don’t feel like reading 20 paragraphs for these simple points: 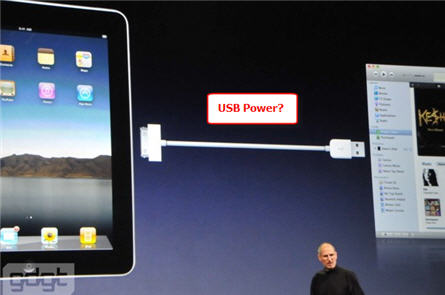 The iPad will power over USB ports with “high power” while in use. Do you have an iPad?Â  How do you like it?Â  Comment on our Facebook page. Continue Reading

Gizmodo posted about a new product which is a docking station for your iPhone which turns it into a corded land line phone. WOW…how times have changed.

Clearly two steps back, a dock station for an iPhone and it’s not even cordless.Â  But looking on the positive side, maybe the old timer middle management crowd can finally embrace technology of the iPhone without giving up their corded desk phone. It’s seems to be more of a concept phone.Â  Lets only hope.Â  What do you think? Source:Â  Gizmodo. Continue Reading

MacBook laptops don’t come with VGA out or DVI out connectors for extending one’s video screens to more then the MacBook itself.Â  Today Wisair announced a solution for just that with their Wireless USB DisplayDock Set.

Wisair’s DisplayDock solution allows Mac users to connect to a monitor, keyboard, mouse and speakers, via a single wireless link with a single adapter that connects to a USB port on the MacBook.Â  Since we haven’t seen a big offering to help out MacBook users we expect this to be a big hit with the MacFanBoys. Wisair will be OEMing the solutions via three vendors [Atlona, Source R&D, Cables Unlimited and Olidata in the UK. Some major points to consider: No price yet was announced from the Press Release or OEM sites.Â  Product will be available the first of March. Continue Reading

iPhone Stanza App Gets The Threat To Remove USB Support 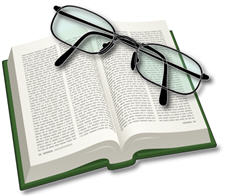 The Stanza app is a program for the iPhone which is an eBook reader.Â  It is slick software, easy to use, and allows you to load books via USB cable.Â  Well, it did. The latest update from iTunes for the Stanza app indicates the USB connectivity feature will be removed from the application.Â  So if you want it, don’t update it. The Washington Post called the maker, Lexcycle, and asked about the details and their spokes person said, “[Lexcycle is] forbidden from discussing the specifics of the conversations with Apple on this matter.” It’s fair to say that Apple is keeping complete control of the device so that additional storage [non iTunes content] cannot be loaded along with reducing any virus possibilities hitch-hiking in via removable storage. To learn more visit the Washington Post article. Continue Reading

Yup, today was the day that Apple announced their iPad product.Â  The very first thing we noticed was a lack of USB ports for storage and connection; however, Job’s didn’t forget it. 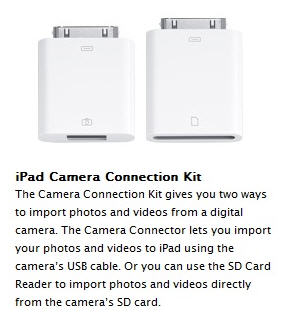 The iPad camera connection kit comes with a male adapter card to connect either USB or SD cards.Â  Given the slim dimensions of the iPad we can understand the lack of design integration for USB, but SD or even microSD, now that makes sense.Â  Our only conclusion is a lack of real-estate on the PCBA used to make the iPad. Interesting side note:Â  Apple has the exclusive patent on the 30 pin female connector it uses and plans to NEVER license it out.Â  I know the USB kit has a male connector, it just reminded me of reading that info a couple weeks back. Source:Â  StumbleTweet. Continue Reading

TouchScreen Preschool Games has just released another iPhone app; Mister Rogers. GetUSB.info doesn’t make it a habit of reporting on iPhone applications, but when you know the author and game publisher it’s worth taking a moment and saying “good job.” 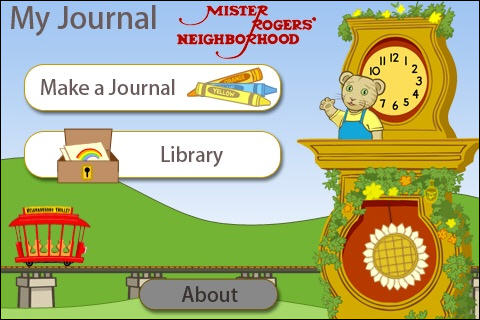 Mister Rogers Make a Journal encourages children to identify and talk about their feelings about their everyday experiences like school, playtime, and friends. The App features an animated version of favorite Neighborhood of Make-Believe character Daniel Striped Tiger, who invites children to make a journal to help them reflect on the things they do and to express how they feel.

What is amazing about this application is the goal of establishing Emotional Development truly works.Â  I have a 4 and 6 year old child and they both create journals about their day and from simply listening to their interaction with the program, I can learn about my child’s day without pressuring them for daily activity reports and grilling them on “how was school today?”

Here is a clip of the Mister Rogers iPhone app in action: Continue Reading

AT&T reports that smart phone users, which make up 3% of their market, are eating up nearly 40% of the data bandwidth on their mobile network. 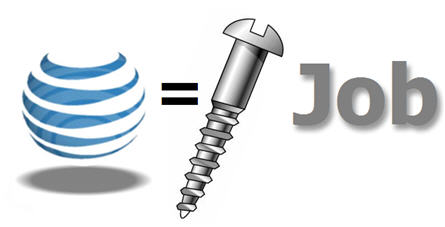 To no surprise, AT&T is considering ways to free up network bandwidth so that everyone without a smartphone, isn’t effected.Â  So what does this mean?Â  It means AT&T might be giving a screw j_b to iPhone users. – by far the biggest consumers of bandwidth from smartphones.

iPhone users on average consume five to seven times more data per month than average wireless subscribers, according to analyst firm Sanford Bernstein. And all this usage is clogging the network, causing many iPhone users, especially in large cities such as New York and San Francisco, to experience dropped calls, slow 3G service, and issues connecting to the network at all.

So what is AT&T considering?Â  I would think upping the usage fees, but this might not work for those who don’t care about monthly fees.Â  Another approach are incentives.

“We’re going to try to focus on making sure we give incentives to those small percentages to either reduce or modify their usage so they don’t crowd out the other customers in those same cell sites,” said de la Vega according to a transcript of the conference. “And you’ll see us address that more in detail.”

Either way, I have a strong feeling AT&T will be limiting or slowing data usage for iPhone users.Â  Continue Reading

5 Ways To Improve iPhone Which No One Has Mentioned – Yet

I’ve read several articles about how to improve the iPhone, most notable are CNET’s comments and iSmashPhone comments.Â  Both articles have good ideas about improving the iPhone software, but there are five user improvements which I would like to humbly suggest. To me, these are fundamental improvements for an everyday user.Â  What do you think? 1)Â  How many times have you read an email chain with an attachment?Â  With the small screen of the iPhone even the shortest email requires you to scroll.Â  With a long email you must scroll forever to get to the attachment.Â  Why can’t Apple make a “paper clip” icon at the top to jump directly to it? 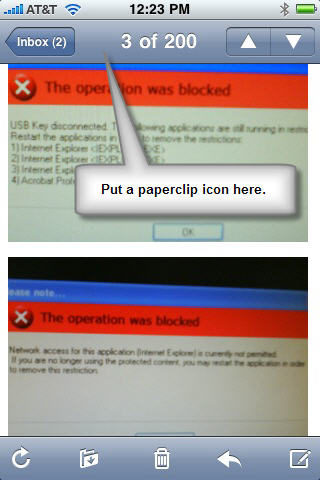 2)Â  I’m the type of iPhone user that likes to keep everything clean and up-to-date.Â  So why is it that I can listen to a Voice Mail from a recent caller, but I still need to click the “Recent” icon to remove the notification.Â  It should be removed automatically when Continue Reading

Sliders for your iPod

We know the Nano and iPod Touch don’t come with speakers, so it was nice to see the latest product roll-out from Green Power.Â  Their sliding speaker system is quite nice, compact for the iPod line. A miniUSB port makes the connection between the iPod and the speaker system.Â  Green Power reports a long playback of nearly 12 hours, but I find that hard to believe because my iPod barely stays charged for 12 hours using the ear buds. 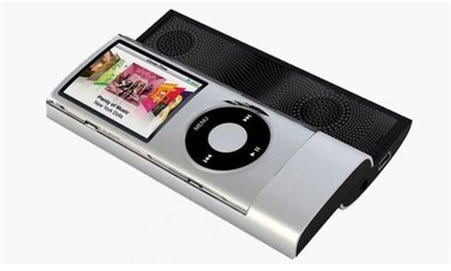 The slider speakers are 1.5Watts which should carry a fairly good sound for desktop use at the office or maybe a quite pool side background music. No report on price, but if they tag it more than $25, you wont see many takers. Continue Reading

Today I updated the official company GetUSB.info iPhone to software rev. 3.0.Â  It only took two blue screens of death in Windows to accomplish the task.Â  Hint:Â  Make sure all other applications are closed during the update. So there are 1.2 million’ish bloggers, blogs and websites that have reported about the iPhone 3.0 software, and I’m adding just one more review.Â  So far 3.0 version is working great.Â  I have many different applications and they all seem to be working just fine. Three notable features I just love are: 1)Â  The ability to Copy and Paste.Â  About time and love the way Apple has integrated the feature.Â  Here is a snap shot [gotta love the message of the snap shot… Moto Razr crashing…too funny!]. 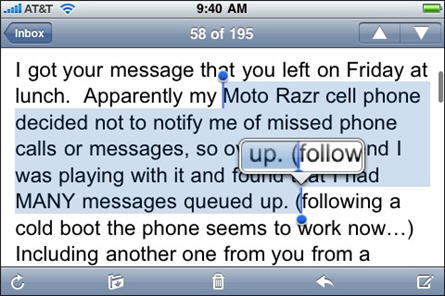 Today I was doing some research for a good solar powered iPhone charger.Â  I went the direction of a DIY [Do It Yourself] project then realized this is all a waste of time.Â  Maybe there are a select few that would jump on a DIY solar powered iPhone charger project, but considering the complexity of the tutorials I found, very very unlikely my average reader would actually do it. So to save yourself the 30+ minutes of looking for a good tutorial, just spend 3 minutes and buy one that will A) work better, B) look better and C) be cheaper.

The project directions can be found here and you’ll quickly see it’s a complex project that requires some tools you might not have, plus supplies you’ll surely need to buy.Â  All in all, it’s about a $70 project, Continue Reading