iMake My Music My Way with iBuddy and iSpin

We’ve seen iPod mixers before but none like this with over sized dials and clean layout design. The iBuddy and iSpin from Sergio are two devices that let you do your music your way. Both iPod DJ systems let you run iPods or MP3 players from the dock stations simultaneously.

The iBuddy center dial is used for flange and autophase between songs on the two iPods and the iSpin center dial is used for spinning between MP3 players with jog wheel for cross over fades. It would be nice if both features where in one – but they’re not. The iBuddy and iSpin accept all iPod models and have a couple pre-program settings along with ability to route a mic through the effects, if you want. Continue Reading

The good folks at AppleTVHacks just released a way to use an external drive via USB for additional storage. Here comes the 1TB AppleTV! So here’s the high-level summary, the AppleTV hack allows the system to boot normally from the internal drive of the AppleTV then allows for digital content to be stored, pulled and played from an external drive. Unfortunately this AppleTV hack is only working on Max OSX at the moment, but a community call to action has been made to incorporate this hack to support other opperating systems. Ahh, how nice.

If interested visit the other side of this link for all the gritty detail. Continue Reading 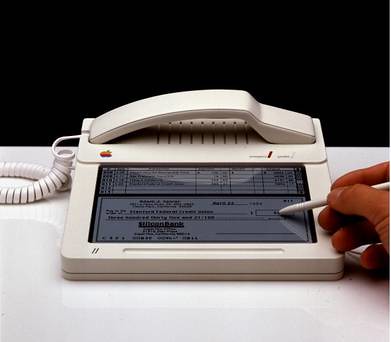 Writing an electronic check with the 1983 iPhone. The 1983 version of the iPhone obviously never made it into production, but it’s still a cool concept. Although writing a physical electronic check seems a little silly now that we have online banking. The image is from fudder.de. BeSocial: digg story | methodshop Continue Reading

Apple’s iPhone has enjoyed favorable reviews since its recent debut, but it got some criticism on Capitol Hill in Washington this week. The phones, which cost between $500 and $600â€”are usable only on AT&T Inc.’s wireless network and will remain that way until 2012. Even though the phones become expensive paperweights if customers quit AT&T’s wireless plan, the company will still charge a $175 early termination fee, said Rep. Edward J. Markey, D-Mass., chairman of a House subcommittee on telecommunications and the Internet. Markey described the phone as a “Hotel California service. You can check out any time you like, but you can never leaveâ€”you’re stuck with your iPhone and you can’t take it anywhere.”

Timothy Wu, a law professor at Columbia University and commentator on technology issues, described the cell phone industry as “spectrum- based oligopoly” where customers have given up their property rights.

“Imagine buying a television that stopped working if you decided to switch to satellite,” Wu said. “Or a toaster that died if you switched from Potomac Power to ConEd.”

Thinking about making applications for the iPhone? Apple released an iPhone developer guide to offer guidelines for creating widgets and applications that will integrate with the device’s Safari browser, mail and mapping applications. 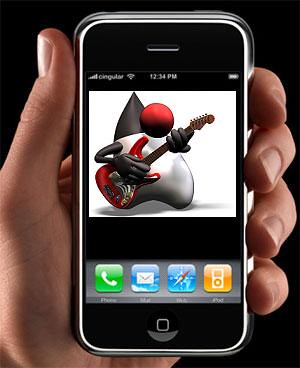 The iPhone was one of the most anticipated product launches of 2007. So how did it do? According to Blackfriars, an analyst firm that has been monitoring Apple’s stores, iPhone sales topped 500,000 last weekend. Here’s a quote from the Blackfriars daily blog:

“The bottom line: some analysts claimed that the iPhone launch would be a failure if Apple failed to sell 100,000 iPhones during the first weekend. Based upon the limited data we have, we believe that number was exceeded in just the first two to three hours. Blackfriarsâ€™ prediction is that Apple will sell 500,000 iPhones this weekend, and based upon limited sales rates reported, that number now looks quite achievable. The only question is whether the demand and iPhone supply is great enough that they might push past the million unit mark this weekend.”

Apple must be pleased with such strong sales over the first weekend, it will be interesting to see if they can keep the sales up, over the coming weeks and months. BeSocial: digg story | methodshop Continue Reading

The iPhone is out. Letting the big-boys do the iPhone coverage I thought to chime in with something a little less mainstream. Apple released a “Works With iPhone” badge, mark, logo, whatever you want to call it.

With the iPhone coming out this Friday we figured to address the “more” in USB Powered Gadgets and more… this week for GetUSB. DLO introduced this lack-luster iPhone case. Available in black, silver, pink and blue.

With the iPhone launch just days away – already the iPhone accessory crap begins. Here we have a cheezy leather case which hardly protects the iPhone while making it all the uglier. Are those feature buttons hidden at top? Continue Reading

Although USB ports are almost as hard to come by these days as it is to successfully clean up your desktop with cable organizers. At just $15 bucks it’s a great gift idea. Supports all 2GB, 4GB and 8GB iPod Nano’s. Continue Reading