Why USB Wins Over Thunderbolt

Thunderbolt is the new technology by Apple which is claiming better performance and speed then our new USB 3 specification.Â  It all looks good on paper and plan, but will reality let Thunderbolt win?

Thunderbolt is the copper wire version of Intel’s Lightpeak technology.Â  Thunderbolt will produce transfer rates equal to 10Gbps which is about double of what USB 3 will offer. Apple convinced Intel to create a “cut-back” version of their optical light solution with an additional caveat of being the exclusive personal computer manufacturer to offer Thunderbolt.Â  And this is where the problem lies. As with USB 1 verse Firewire [Apple] the speeds of Firewire where faster than USB 1, but FireWire equipment was more expensive, Apple charged what was considered a substantial royalty per part, and with Macs in general holding much less of the market, meanwhile the Windows-side controllers and drivers for Firewire ran the gamut from lousy to terrible. Intel and Apple jointly developed Thunderbolt, which may actually be part of the problem.Â  As of June 2011, Apple is the only company committed to using Thunderbolt.Â  HP has officially selected USB 3 and we suspect Dell will not be far behind.Â  After all, these guys don’t like to support a technology to a competitive company which holds Continue Reading

The up coming Green Lantern movie is one of the most anticipated summer movies of the year. My wife would say it’s because of Ryan Reynolds, I’d say because the Corp’s kick a$$. Either way, the movie is not due out for another 30 days. However, you can get a quick fix with these Mimobot Green Lantern Corps action figures in the shape of a USB drive. Mimobot is a company which has carved out a creative niche for ultra cool and ultra cute USB flash drives with a cartoonish figure. The most recent addition are Hal Jordan [pictured], Tomar-Re, Kilowog and Sinestro.

The USB 2.0 drives come preloaded with content you can’t get anywhere else. The reason is that Mimobot teamed with DC Entertainment to put together some collectable content like screen savers, wallpaper, avatars and other digital extras. The Green Lantern Corps ranges in size of 2GB to 16GB. Prices range from $22 to $65 respectively. Continue Reading

Off Topic: Filter Bubble. You Should Care.

Computer On A USB Stick With Processor

For several years we’ve seen many Linux guys post about bootable USB flash drives into portable operating systems like Ubuntu or simplified versions of the OS for children, like Strawberry from SugarLabs via donated USB flash drives.

In the spirit of ultra portable operating systems – over the weekend – we learned of Raspberry Pi.Â  The Raspberry is not only an operating system from a flash drive, but it includes the processor too!Â  This means the Linux OS is not high jacking the hardware of the host computer, but rather using it’s own processing power to boot into Linux. The developer, David Braben, are shooting for a target price of the Raspberry USB computer to be around $25.Â  The above prototype isn’t pretty, but hey – what prototype is?Â  David and his team started this project in the effort to bring ultra low cost computers to less fortunate kids who need and want computer access. A long long time ago, the One Laptop per Child was a program to get $100 computers into the hands of kids who’d otherwise never get a computer. To give you an idea of what this mini USB computer can do, here are the specifications of the prototype: If you are looking for video to spoon feed you this information, check out the video after the jump: Continue Reading

Unless you’ve been living under a rock the last 7 days, we all know Osama bin Laden was killed on May 1, 2011 by US Special Forces. Reading through many articles that week, it’s interesting to learn the al Qaeda leader kept quite and under the radar for nearly 5 years by living in a solid wall compound and without direct cable access, TV access, internet access. The only direct access bin Laden had was a radio. That said, Osama bin Laden kept current with the outside world by use of flash drives. It was reported his trusted courier would shuffle USB flash drives between his compound and the outside world to communicate, send message and negotiate with the al Queda terrorist group. During the attack on Monday May 2nd the Special Forces recovered nearly 1000 thumb drives which contained all sorts of information about bin Laden and his relationship with al Qaeda organization. What is also interesting is the level of hypocrisy bin Laden had. Along with the report of flash drives – which you can only assume many of them where made by US companies – bin Laden also had Coca Cola brought to his compound as well. It seems extremely hypocritical for a terrorist who’s sworn his life to avenge all American’s, yet indulges in US products during his day-to-day existence. With the hundreds of USB flash drives now in the hands of the Special Forces we should learn a lot more about the habits, plans and leaders of the al Qaeda network. Glad bin Laden is gone from our world. Continue Reading

How To: Make Your Own USB Keylogger

USB keyloggers are always a good idea to have around. Sure you could make the argument that it’s incroaching on someone’s space, or that it’s flat out illegal to track someone without them knowing…but forget all that.Â  To many ups sides. What about keeping check with your kids?Â  Or making sure employees are keeping honest?Â  What about some backup or recovery and you need to know where you’ve been? 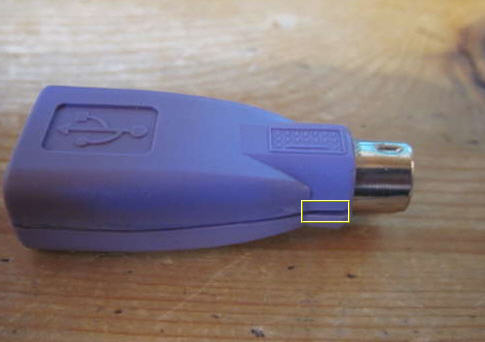 Well in any case, for the DIY folks, here is a nice tutorial on taking a standard PS/2 and converting it into a USB keylogger.Â  What I like about it is the simple fact the average computer user wouldn’t notice.Â  We all see the PS/2 on the back panel, so why investigate it to see if there’s mod to it? The full tutorial can be found at Instructables.Â  Only tip is that you need some good soldering skills.Â  Other then that, not a hard task at all. Continue Reading