SD Duplicator Copies 20 At a Time For The UberGeek

Nexcopy announced their new 20 target SD Duplicator earlier today. Definitely a device for the ubergeek who’s into data loading Secure Digital media. At first glance you ask yourself “Who’d want 20 copies of their SD card from their camera?” But it’s clear Nexcopy isn’t chasing down the guys looking to make a 100 copies of their weekend Vegas photos [or are they?]. The SD duplicator is geared towards companies who send out software applications on SD cards for field devices, or need to manage a large number of miniSD cards for an army of Palm Pilots. The SD200PC also works with microSD cards so the phone companies will have a field day loading up their phones with promo material for lucky customers. Which makes sense, because these Smartphones and PDAs are getting so powerful and the media has so much capacity, many people keep most of their data on microSD cards these days. The unit connects via USB and has 20 numbered SD ports so it’s easy to identify which SD card is which. The unit comes with software that supports FAT and FAT32 formats and includes NTFS support with their bit-for-bit copy function which also supports Linux distribution packages for those embedded applications these ubergeeks seem to dream up. All SD formats are supports and for the not-so-techy users, the Nexcopy software has a job wizard to guide you through the SD duplication process. The SD duplicator has a list price of $1,299 and available for immediate delivery. Continue Reading

An Instructables member took an extra Wiimote and turned it into the eye-site gauge for the famous USB missile launcher.Â  Now you can have all the fun with the added pin-point accuracy for a deadly shot with your missile launcher. 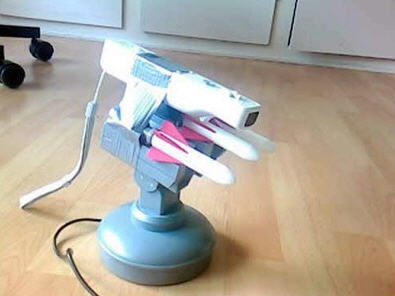 With a spare remote, USB cable, USB missile launcher and some code they guys at Instructables provided, you too can have this USB hack.Â  The only concern you should have is the foam missiles really aren’t all that accurate, at least not the sample we tested.Â  But hey, forget about the logistics of it all, it’s the cool factor we’re chasing after. Source:Â  Engadget. Continue Reading

ADS Technology has released their Instant Music ripping system to easily convert old vinyl and cassette media to MP3 files.Â  The Instant Music will convert any analog audio signal into any number of popular digital formats such as MP3, WMA or OGG. 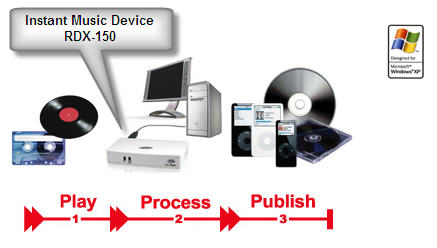 Instant Music connects via USB and ships with Acoustics Spin It Again software to set sample bit rates, configure audio formats you plan to convert from analog to digital and more advanced features such as ID3 tagging. I don’t think it’s as slick looking as the Ion Audio unit but then again we see a big price difference between the two ($49 verse $150) and the Instant Music will convert any analog signal, not just those old vinyl records. Continue Reading

Not So Biodegradable Corn Based USB Drive

This corn based biodegradable flash stick is definitely a step in the write direction, but a little over zealous on the claim of being a biodegradable flash drive.Â  The stick has a corn based shape for the outside, but you’ve still got the internal flash memory and PCB board holding it all together.Â  So don’t feel too good when you dump this in the trash – it’ll still be around after 500 years. 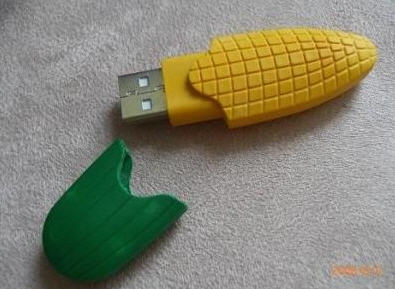 But, it’s a step in the right direction.Â  At least the outside is biodegradable, so we’re going to give you props for that. As EverythingUSB says “Should be a great promo gift at the next Ethanol trade show…” Source:Â  TechFresh.net. Continue Reading

The internet is something we all take for granted.Â  We surf, play and view at our leisure, but for some, this freedom we have is a far cry from their everyday life.Â  Who am I talking about?Â  China.Â  It’s been know since the birth of the internet that China has ultimate control on what you see and hear from the internet.

Typically this wouldn’t bother most, but considering the 2008 Olympics are launching today, there are many foreign visitors who can’t use the internet the way they typically do.Â  This is where the “Freedom Stick” comes into play.Â  The USB dongle Freedom Stick, is a pre-loaded USB drive with all the software, utilities and hacks to get around the Great Wall Firewall of China.

USB dongle is pre-loaded with software which will secure the communications of any computer it is slotted into. Made available by Germany’s Chaos Computer Club, the stick uses the TOR (The Onion Router) network to cloak your connections, routing traffic around the world through anonymous computers, thus avoiding detection.

The USB dongle is available for $30 and is clearly a must-have travel item for this years 2008 Olympics. Continue Reading

i-Knock A Self Inflicting IM Notifier

The i-Knock is another knock-off Instant Message notifier.  With any of the popular instant message services like Yahoo, MSN, AOL or Skype this i-Knock is there for support and alerts.  This time, however, the notification is in the form of a knock to the head.  The i-Knock doesn’t stop there, you can also load specific MP3 files to play for certain instant messaging parties.  I’d sync up “Ding-Dong-The-Witch-Is-Dead” from Wizard of Oz for the mother-in-law.

The i-Knock connects to your computer via a USB cable and is also powered through the USB cable.  There are over 20 emoticons, email client if you choose and log-on notification function for those within your network. Continue Reading

We all know the George Foreman USB grill was an April Fools joke a couple years ago, well now Instructables [member] claims he can cook eggs via two USB ports. But could this be true or are we getting punked? If a USB port doesn’t put out more than 5V of power, then how the hell do you get a couple aluminum pans to heat up enough to cook eggs? I’ll let you be the judge on this one:
DIY USB Cooking Pan – video powered by Metacafe Source: Giz. Continue Reading

Engadget reported on the new USB luck from Thanko.Â  The not-so-clever device uses a 3 wheel number combination lock which attaches to the USB connector of your USB drive, or anything else with a USB connector.Â  Although this looks like something more to keep the honest people honest as disassembling the lock itself doesn’t look to be terribly difficult.

The funny part is, if the data is that important to keep safe, wouldn’t wouldn’t you spend a few minutes learning about encryption?Â  I mean with the most powerful encryption software by TrueCrypt available for free, why not.Â  Kicks the a$$ of this “hardware” solution. Continue Reading

I’m sure the Spaniards would order a whole nations worth if these if the announcement was made just a few weeks earlier – with their Euro 2008 win and all. The wireless USB soccer ball is a great way to show your support for the game.Â  Or a great way to get into the upcoming Olympic spirit.Â  The wireless USB soccer ball, although Goddy looking, seems plenty comfortable for who-ever drops the $22 need for ownership. 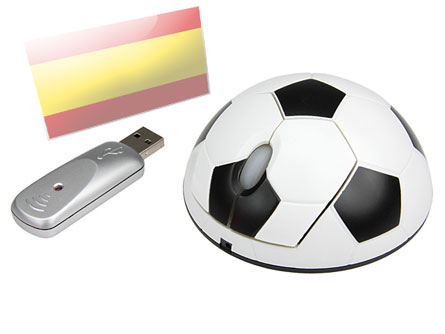 Resolution is 800dpi, wheel used as third button, use the mouse up-to 3 feet away, comes with rechargeable AAA Ni-H batteries and good for all Windows operating systems.Â  USB rechargeable too. Continue Reading

USB As Tough As Nails

This USB design fits into the same category as the Sawed Off USB Key we reported about one month ago. The USB Nail generates this look of amazement at first glance, “How did a nail get jammed into your laptop?” Well the answer is quite easy! 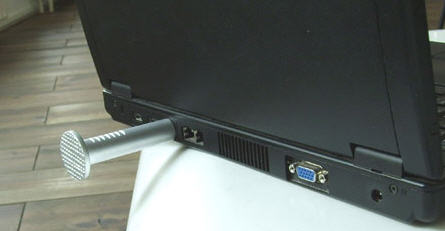 It’s just a USB drive. A design company in Denmark, Plankton, came up with this off-the-wall look. Would this change the definition of a “rugged flash drive?” Probably not, but it’s definitely a fresh twist on USB storage. 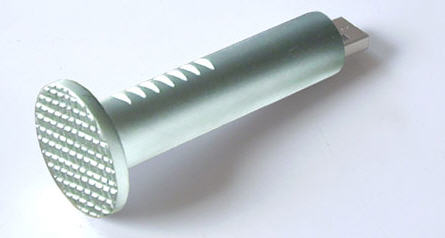 Plankton is offering up the USB Nail for [about] $46 directly from their site. Continue Reading