The sleek design is designed for simplicity with auto detecting Bluetooth signal upon power up, what is now standard echo cancellation technology and compatible with virtually any VoIP service (Skype, MSN, Yahoo, Google Talk) 3 hours of continuous talk time, 30 hours standby time and a blinking light when only 10% of the charge is remaining. Nice built-in stand too. For one wireless, cable free Continue Reading

With recent issues of overheating battery packs Belkin introduces the Laptop Cooling Stand (F5L001) with a unique design which pushes heat through a channel and away from your laptop.

Using a laptop’s USB port the Belkin Cooling Stand blows heat away from the under part of your laptop all the while providing a flexible stand for keypad typing and laptop positioning. Continue Reading

Movies From USB to TV – Thanks SanDisk

Sometimes you want to give USB a big huge. Case in point, the new USBTV from SanDisk is something anyone could apprecate. It’s a device to simply copy video from your PC and play on your TV. The flash drive is loaded with a media player and video codecs so the device will play a video file directly off the USB drive to the TV.

So your TV doesn’t have a USB slot, well neither does mine, but that’s OK Continue Reading

The good folks over at GizmosForGeeks tipped us about Snap-Link from the 2007 CES show, a USB flash drive that controls home security, house temperature, lights, view through house webcam and even waters your lawn.

Snap-Link from Home Automation Inc. (HAI) uses a secure Ethernet port on a pre-loaded USB flash drive to access your house system via the Snap-Link software. It’s a great solution because access can only be made with Continue Reading

What other household name can we think of other then Kodak who consistently brings new and convenient technology to the masses. Well, since 1878 Kodak has been doing just that. Earlier this week Kodak took another step forward by introducing their EASYSHARE Digital Picture Frames. Here’s the EASYSHARE picture frame, but lets take a look back at the top 12 milestones the average consumer would care about (not industrial advancements) THEN we’ll get to the picture frame:

Flash Drive Tracks Your Weight via U3

Little on the heavy side and looking to track those extra pounds? CalorieKing introduces a diet log for the U3 flash drive platform to record everything you eat and the exercise you do against the world’s largest food and exercise database. But then again, if you are disciplined enough to download CalorieKing software, activate it in your U3 flash drive and enter daily food intake and exercise routines then chances are…

Now until Jan 13th get a Kingston 1GB DataTraveler and 1GB Secure Digital Card for only $10.90. Free shipping and $40 and $45 mail-in rebate (respectively) and they’re in stock so these guys will cover both digital camera needs and U3 personal storage needs – at just over $10 it’s a tough deal to beat – that’s why GetUSB is bringing it to you.

Cardo Wireless is a premiere Bluetooth and VoIP headset manufacturer with well established lines of Scala-500 and Scala-600 wireless headsets. Cardo has just announced their Scala-700 series – although an announcement made back in August, they’ve now been able to pull off a shipping product.

Tired of grey and black colored Flash drives? USB flash drives are now candy colored thanks to Transcend’s Jetflash V60. The drives are available in four colors, with each color corresponding to a different storage capacity: orange is 512MB, blue is 1GB, red is 2GB and green is 4GB. All the Transcend drives come with basic security software including a program capable of locking your PC from prying eyes and wayward fingers alike. 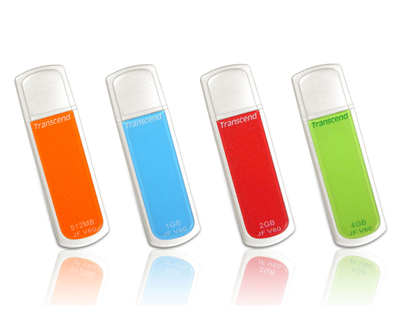 A Transcend press release for the Jetflash V60 claims that “Now everyone can transfer to a paperless society.” Yes, Western civilization was just waiting for the V60 to appear in order to be convinced that a paperless society was viable. Technical Details Continue Reading

Is that a Switch Blade or New Lexar 360 JumpDrive?

Lexar announced their new Lexar JumpDrive 360 USB Flash Drive at the 2007 CES show. The new style is a capless design and encased in a rotating metal jacket you flip out before use – kinda like a switch blade.

All Lexar drives will now ship with BitLocker Drive encryption software and Windows PE 2.0 for Vista. Of course Lexar is claiming the JumpDrive 360 is compatible with ReadyBoost, but who isn’t making that claim these days. Finally, Lexar will include their PowerToGo software on the JumpDrive 360 and all other devices, which BTW is a spit image of U3. Continue Reading

Patriot Memory is claiming the world’s fastest flash drive at the CES 2007 show this year. The X-Porter XT Version 2 can achieve 39MB transfer rates. Now besides the fact of anyone reproducing a manufacturers test specs, lets take it at face value – WOW that’s fast.

With flash drive capacity getting larger and larger this type of news is well received. Now, if iPods and PDAs could get this transfer rate then we could do much better things on Friday night then sync our portables.Â  Available capacities are 1GB to 16GB…what, no 32MB version? – I’d like to transfer all my data in 1 second. Continue Reading